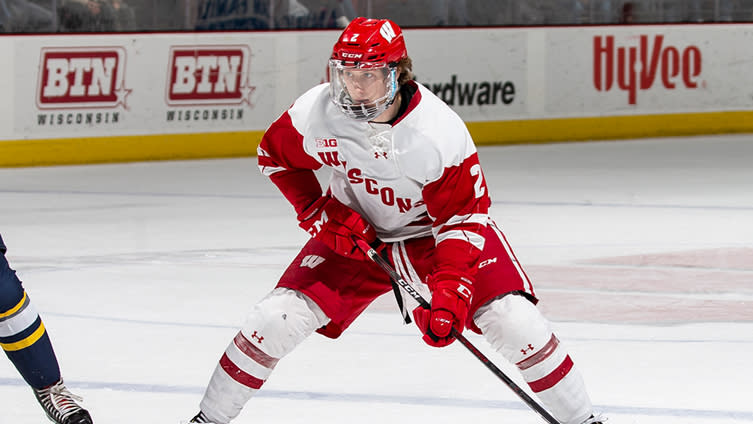 The Blackhawks’ defensemen pipeline is quickly starting to fill up after adding another name to the mix last week in Wyatt Kalynuk, who inked a two-year, entry-level contract that runs through the 2021-22 season and carries a cap hit of $925,000.

Kalynuk, who was drafted in the seventh round (No. 196 overall) of the 2017 NHL Draft, decided to forgo his senior season at Wisconsin to turn pro, which was to be expected. But he found himself in an interesting situation after that regarding his future.

Because he was drafted at 20 years of age, the Flyers held his rights for only three years and not the traditional four. That means Kalynuk had the option to, respectfully, become an unrestricted free agent after the Flyers’ exclusive 30-day negotiating window passed and that’s exactly what he did.

“I was in a pretty unique spot,” Kalynuk told NBC Sports Chicago in a phone interview. “For me, I just thought if I had the chance to hear from every NHL team not just one, I figured why would I not do that? I think everyone in that spot would likely do the same.”

Free to sign with any of the 31 clubs, the Big Ten star eventually narrowed his list of teams from six to three before zeroing in on Chicago, which showed “a ton of interest right away.”

“I think there’s a chance for me to step in and contribute right away,” said Kalynuk, who was part of the Blackhawks combine before the draft in 2017. “It doesn’t matter where you go in the NHL or where you look, every team’s got depth and you’re going to have to earn your spot and prove to them that you deserve to be there and you should play. But in Chicago, I think there’s some opportunity.”

“He’s a very talented defenseman, someone we’ve watched pretty closely going back to his draft year,” Bowman said. “Obviously Philadelphia drafted him, but we kept in touch. His progression at Wisconsin was pretty noticeable. His best attribute would be his mobility and his skating. Really exciting offensive defenseman, good size player, really brings a lot of different elements to the table. I think he’s going to complement our group.”

Kalynuk is coming off a junior season in which he set a career-high with 28 points (seven goals, 21 assists) in 36 games to earn All-Big Ten Conference honors while serving as Wisconsin’s captain. He’s more polished and further along in his development curve than some of the other blue line prospects in the Blackhawks’ organization, given his size (6-foot-1, 189 pounds) and age (23).

Kalynuk is ineligible for the 2019-20 resumption but is expected to compete for a full-time roster spot next season. At least that’s what his intentions will be.

“I’m going to go to camp and my mindset is going to be to make the team,” Kalynuk said. “I’m not going to sit around and wait. I’m going to go into Chicago, work hard and try to earn my spot right away.”

Next Sporting KC beat Real Salt Lake 2-0, move on to MLS is Back knockout rounds

Comebacks were the story of the day

As Fourth Line Begins To Really Get Going, So Too Are Rest Of Bruins

Gary Bettman admits a Jan. 1 start date for the season is ‘a work in progress’

Hinch gets his chance for baseball redemption