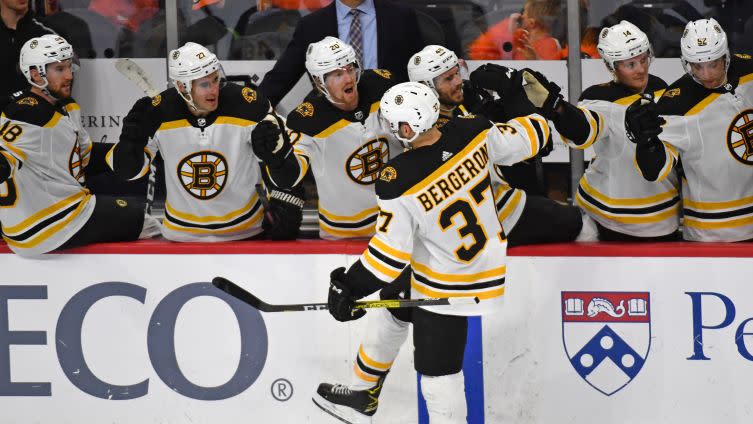 With training camps expected to open around the NHL next week, it feels like a good time for a Bruins refresher as everybody gets back up to speed with the hope that the league will return to play games next month.

The Bruins were at 100 points when the regular season went on pause in mid-March and would have been the No. 1 seed in the entire Stanley Cup playoff field given the commanding lead they had on everybody else in the league. As it was, they were awarded the President’s Trophy as the points leader in the regular season and won the Jennings Trophy as the team with the lowest goals against average in the league as well.

David Pastrnak became the first Bruins player since Phil Esposito to lead the NHL with 48 goals scored in a tie with Washington’s Alexander Ovechkin, and Tuukka Rask finished as the NHL leader with a 2.12 goals against average. The Bruins finished ninth in the NHL with 3.24 goals per game, tops in the NHL with 2.39 goals allowed per game and had the second-best (25.2 percent) power play and third-best penalty kill (84.2 percent) in the league this year.

All of that combined with last season’s run to the Stanley Cup Final has the Bruins looked at as favorites headed into August’s 24-team postseason tournament that will kick off the Stanley Cup Playoffs. So here’s a quick run-down on the Black and Gold. It’s been a while since we checked in on them with any actual games to play in the near future. A two-week training camp is expected to kick off for the B’s starting Monday at Warrior Ice Arena.

Where B’s stood when NHL season was paused

The Bruins had won 16 of their last 20 games dating back to the All-Star weekend and their bye week, and they were rolling after picking up Ondrej Kase and Nick Ritchie from Anaheim at the trade deadline. B’s head coach Bruce Cassidy had begun doing some tinkering with his forwards while slotting Kase and Ritchie on either side of David Krejci while dropping Jake DeBrusk to the third line with Charlie Coyle and Anders Bjork/Sean Kuraly.

In the final game ahead of the break, Rask had made 36 saves for a 2-0 shutout win over the Flyers, while Matt Grzelcyk (power play) and Patrice Bergeron provided the offense. Brad Marchand, Torey Krug and David Pastrnak were each point-per-game players in March. Charlie McAvoy was averaging over 26 minutes of ice time per game and Bergeron had two goals in four games during the month of March. Meanwhile, Rask was rolling with a 1.67 GAA and a .938 save percentage in the second-to-last month of the regular season.

Who was injured for the Bruins on March 10?

Both Torey Krug and Brandon Carlo sat out the March 10 game against the Flyers with upper body injuries. Krug had suffered his after an awkward tumble into the boards, while Carlo had missed a couple of games with a suspected concussion after taking an elbow to the face from Florida Panthers forward Evgenii Dadonov. The injuries led to Bruins defenseman Connor Clifton playing his first game since December, so when play resumes, Clifton will have played a grand total of one NHL game in the last eight months. Both Krug and Carlo are 100 percent healthy for the Bruins after sitting out the last few months. The only Bruins player still injured is defenseman Kevan Miller (knee), who has already been ruled out for this summer’s playoffs after missing the entire 2019-20 regular season.

Bergeron, Brad Marchand and Zdeno Chara have led the voluntary Phase 2 skating practices at Warrior with appearances by John Moore, Par Lindholm, Kuraly, Grzelcyk and Krug, along with goaltenders Jaroslav Halak and Rask. Joakim Nordstrom had arrived back from Sweden and was expected to join the Black and Gold on the ice once he’d done the necessary quarantining and testing. At this point, most of the Bruins should be back in Boston considering that many will have to quarantine for a substantial period of time if they flew back into the country.

Looking ahead: What’s next for the Bruins?

Once the Return to Play plan is approved by the NHLPA at the end of this week, expect announcements to come fast and furiously from NHL teams. The Bruins are expected to start a two-week camp on Monday and will head to their Toronto hub city in the last week of July.

Qualifying round games and round-robin games are expected to start on Aug. 1, with the Stanley Cup Playoffs set to begin around Aug. 9 or so. The teams will play two rounds of playoffs in their respective hub cities, Toronto and Edmonton, with the conference finals and Stanley Cup Final expected to be played in one city, which is expected to be Edmonton provided the COVID-19 numbers stay steady out in Alberta.

The Bruins will play one game apiece against the Lightning, Capitals and Flyers in the round-robin after playing one exhibition game in Toronto, and then the Eastern Conference teams will be re-seeded to determine first round playoff matchups. If the Bruins retain their top seed then they would play the lowest seed still alive in the Eastern Conference after the qualifying rounds as the NHL format has all teams re-seeding after each round.

Lightning up 2-0 on Stars, 20 minutes from Stanley Cup

Kendall Waston on FC Cincinnati: ‘I want to have a new challenge’ | 2019 MLS Season Previews

Minor victory for Rangers in 4-0 win over frustrated Astros