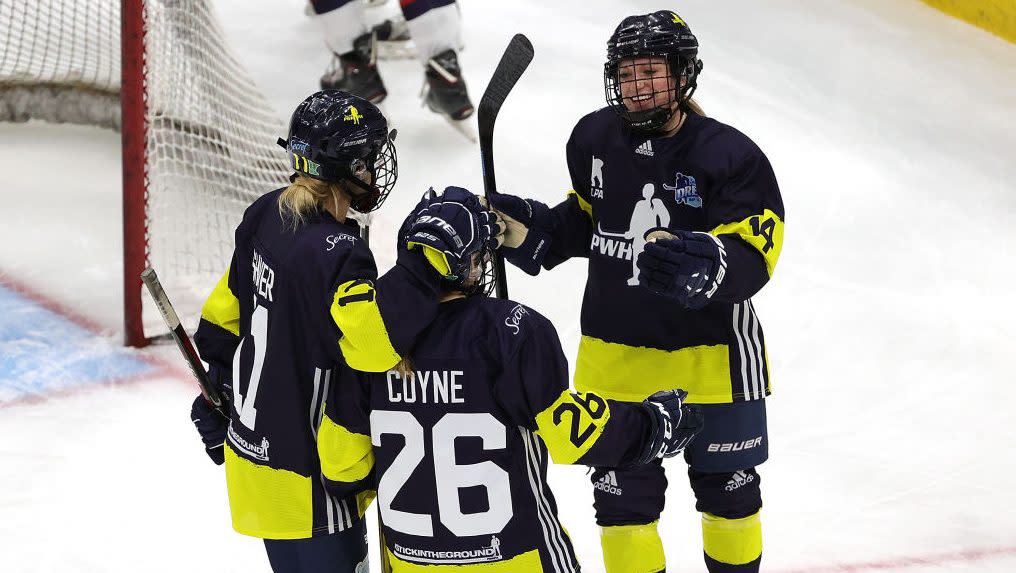 If you ever want to identify an all-or-nothing player, at least from an offensive standpoint, you might not do better than Noel Acciari.

Despite averaging a solid 14:24 TOI per night through 14 games, Acciari failed to score a single goal or assist for the Florida Panthers this season. Until Saturday, that is.

To be fair, he did score 20 goals (and seven assists) over 66 games last season. Granted, it was also hot-and-cold in its way, as Acciari rode an 18.5 shooting percentage. Either way, pretty quirky stuff. Hockey’s strange!

It’s even tougher than usual to split hairs regarding the three stars of Saturday in the NHL. Especially if you ding Acciari for generating his hat trick in something of a blowout for Florida.

So, feel free to disagree about these choices, but let’s make goals stand as tiebreakers.

And then there’s the extra tiebreaker of points coming at a premium. That’s why Anze Kopitar stands a little taller than his counterparts.

Kopitar scored two goals and one assist for the Kings, who managed to beat the Blues in overtime. While Kopitar didn’t factor into that OT-winner, he contributed to all three Kings goals in regulation.

If you’re pointing fingers at the Kings’ slide, it’d be fair to critique players who’ve fallen really far (Jeff Carter), ones who might be playing more on reputation (Jonathan Quick over Cal Petersen?), and a high-price polarizing player (Drew Doughty). But Kopitar? He’s mostly been a rock, albeit a pricey one.

With those three points, Kopitar’s generated an impressive 28 points in 23 games.

OK, in this case, goals were not really at a premium. The Canadiens roasted the Jets to a score of 7-1.

You know it’s a rough one when your Twitter feed laments the sheer pain of it all.

Gallagher dished out the most pain, though. He scored two goals and one assist, including a tally that Connor Hellebuyck will want purged from the collective memory. Gallagher ended up +3 with three shots on goal, too.

Connor McDavid breaks his slump, and other honorable mentions

Either way, McDavid went the extra mile to make sure that he’s still never experienced a four-game point drought in his illustrious career. McDavid scored the game-winner and two assists in a 3-2 game. Looks like McDavid can resume trying to match or exceed Sidney Crosby‘s career scoring pace.

Highlights of the night: Barzal, Terry, Huberdeau show off hands

Islanders star Mathew Barzal scored what could be the goal of the year. Just incredible stuff from an incredible talent.

Impressively, other NHL players scored goals that gave Barzal competition on Saturday. With two goals, Troy Terry almost enjoyed as strong a night as Ducks teammate Rakell, and he showed nifty hands against a goalie about as helpless as the one Barzal bamboozled.

Completing that trifecta of soft hands in close, check out Jonathan Huberdeau.

As you can see from the highlights embedded above this post’s headline, Minnesota enjoyed strong work from the likes of Abby Roque and Kendall Coyne Schofield. Nicole Hensley nearly generated a shutout (33 out of 34 saves), but Brianna Decker scored a late spoiler goal.

Check out some other stats, via Sportslogiq:

The PWHPA has partnered with the Blackhawks and Bauer Hockey to host a pair of 2021 Secret® Dream Gap Tour games in Chicago on March 6-7, with Saturday’s matchup at United Center live on NBCSN, followed by a game at Fifth Third Arena in Chicago.

Comprised of approximately 125 of the world’s best hockey players, the PWHPA was formed to advocate for and advance equity, fairness and opportunity in women’s professional hockey. Specifically, the group’s goal is to create a sustainable league that pays a living wage to players, provides appropriate elite-level resources (i.e. ice time, facilities, trainers, etc.) and invests in marketing that showcases the players and game. Supporting the series in Chicago, AT&T will serve as the local presenting sponsor.

Tom Wilson suspended seven games for hit on Brandon Carlo Wayne Gretzky delivers emotional eulogy at father’s funeral From the Fortress to the Garden, NHL starting to welcome back fans

James O’Brien is a writer for Pro Hockey Talk on NBC Sports. Drop him a line at phtblog@nbcsports.com or follow him on Twitter @cyclelikesedins.

Saints will hold on for No. 1 seed in NFC Playoffs — Jonathan Vilma