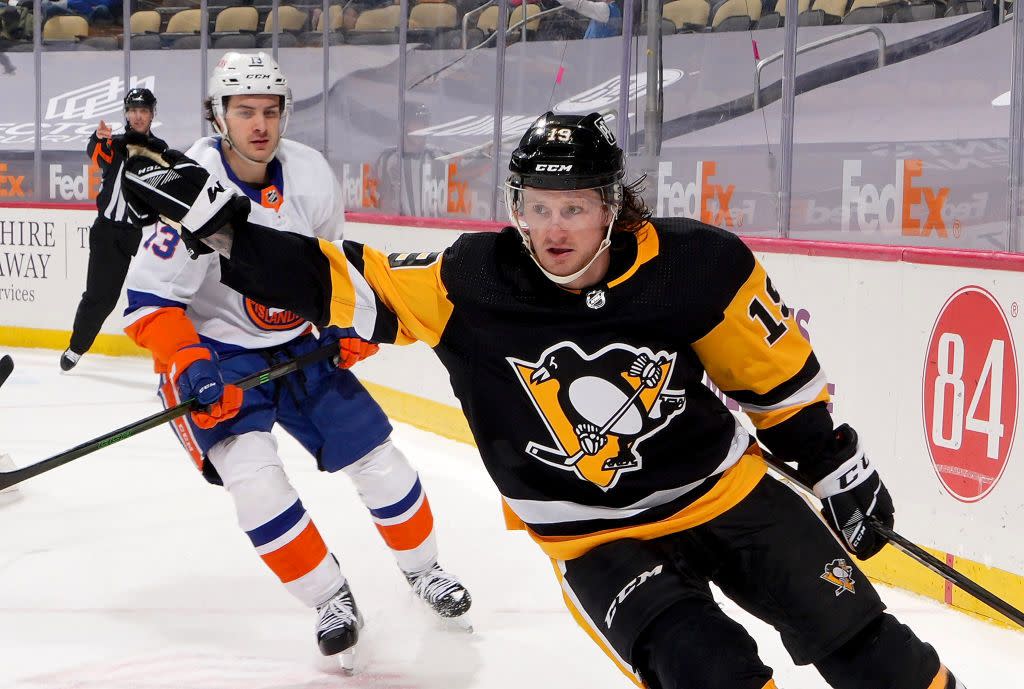 PITTSBURGH (AP) — Mike Sullivan spent a decade in the NHL carving out a niche as a defense-minded forward more intent on blocking shots than taking them.

He wasn’t the fastest, wasn’t the strongest, and he knew it. He survived 11 seasons by playing with a sense of responsibility bordering on obsession.

Nearly 20 years after his final game on the ice, Sullivan’s ethos endures. The quickest way to the Pittsburgh coach’s heart (and the playing time that comes along with it) isn’t some sort of dazzling end-to-end rush but a timely clear. Or a backcheck that thwarts a scoring opportunity. Or being in the right place at the right time all the time.

Maybe that’s why he’s so thrilled with the evolution of his team this season. Pittsburgh put together the best March in the NHL despite a steady stream of high-profile players to the injured list. The entire second line (Evgeni Malkin, Kasperi Kapanen and Jason Zucker) and the majority of the third line (Brandon Tanev and Teddy Blueger) all skated off the ice and out of sight for extended periods.

Yet the Penguins used a 12-3-1 sprint to move into a tie with the Islanders for second place behind Washington in the relentlessly competitive East Division. While the top line anchored by Sidney Crosby has carried a large portion of the scoring load — Crosby, Bryan Rust and Jake Guentzel combined for 22 goals and 29 assists in March — they’ve been aided by a sensible style of play that’s often made Pittsburgh greater than the sum of its available parts.

“We have guys I feel like sometimes getting hurt every night, and we have that mindset of next man up; whether it’s forward or defense, we’ve got it covered,” said forward Jared McCann, who scored the eventual winning goal in a 2-1 victory over the Islanders on Monday. “We come in, do simple things and we’ve got the skill level on this team that’s going to take over.”

The list of unavailable players grew earlier this week when goaltender Tristan Jarry, who has regained his All-Star form from last season — left after the first period against the Islanders with an upper-body injury that Sullivan described Wednesday as “day to day.”

No biggie. Casey DeSmith came in and stopped 19 of 20 shots as the Penguins wrapped up a 4-0-1 homestand.

We are going to learn a lot about the Minnesota Wild NHL On NBCSN: Kevin Lankinen is keeping Blackhawks in playoff race Sabres winless streak ends with blowout win over Flyers

The final minutes were a clinic in defending a lead. DeSmith made a pair of saves when the Islanders had the Penguins pinned deep, the second a stop on Scott Mayfield with 3:19 to go. The Islanders never put another puck on DeSmith. Crosby and Mark Jankowski both blocked shots and the Penguins won each of the final four faceoffs to effectively play keep away.

“It’s fun to coach these guys and watch these guys the way they’re playing right now,” Sullivan said. “I think there’s a certain simplicity to our game right now that makes us hard to play against.”

The goal will be keeping that simplicity in place once the bold-faced names find their way back to the lineup. Zucker nearly scored in his return from an 18 -game absence on Monday. Tanev and Blueger are practicing, while Malkin and Kapanen have not begun skating, though both are expected to be available by the playoffs.

Fully healthy, the Penguins are among the most explosive teams in the league. That’s not always a good thing. Pittsburgh went through a similar stretch of solid play in the first half of last season when Malkin and Crosby both missed a month or more. They played more conservatively because they didn’t really have a choice.

An odd thing happened, however, when Pittsburgh got healthy: losses piled up. The Penguins dropped eight of 11 before the COVID-19 shutdown. Then they were stunned in the qualifying round of the playoffs in four games by Montreal.

Letting his most talented players be themselves while also asking them to play all 200 feet of the ice is a battle Sullivan has waged since he took over in December 2015, a run that includes Stanley Cups in 2016 and 2017.

“I’ve always been a believer as a coach and as a coaching staff that we don’t want to take the sticks out of our player’s hands,” Sullivan said. “We want to allow them and give them the latitude to act on their instincts, and in a lot of instances that’s what separates some of our players from others in the league, and really that’s what makes them what they are. We just have to do it the right way and we’ve got to make sure we manage the puck accordingly in order for us to be a hard team to play against. I think when we do that we’re a competitive hockey team.”

The Penguins were fast, gritty, opportunistic and largely risk-averse during their Cup triumphs. Not so much during recent playoff flameouts.

Asked how his team keeps its blue-collar mentality in place when players like Malkin and Kapanen — remarkably talented playmakers who often thrive when taking chances — McCann admits he’s not sure. Maybe by then everything will be so ingrained they’ll absorb it through osmosis.

“I mean (Malkin and Kapanen) are very very hard to replace,” McCann said. I think when they’re in the lineup they make us a very good team. And when they do come back I think we’ll keep that mindset of keep it simple and if there’s a play to be made, we’ll make it. If it works out, great, if it doesn’t, we’ve got to get back and play in our end first.”

How to watch Washington Capitals vs. Carolina Hurricanes

PHT Morning Skate: Best rentals; Who will Hawks have in goal next season?

Xander Bogaerts Had This Advice For Garrett Whitlock Amid Struggles Vs. Rays