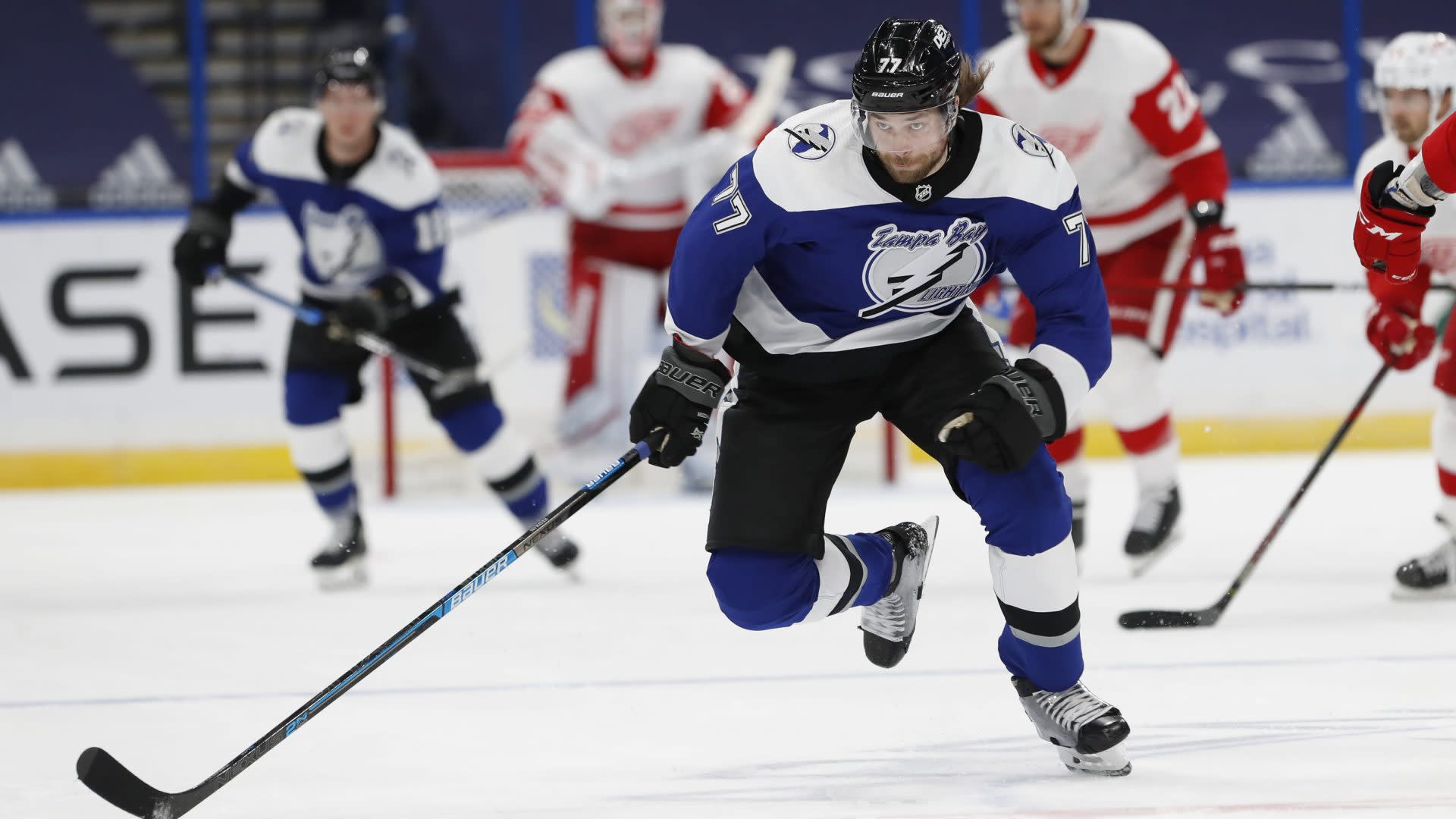 In this week’s edition of the NHL Power Rankings the two Stanley Cup Final teams from last season find themselves trending in two very different directions in recent weeks.

While the defending champion Lightning climb to the top of the NHL Power Rankings with the best record in the league entering Monday, the Stars have cooled off considerably from their fast start by losing seven of their past eight games. That has resulted in a slide down the rankings for the second in a row.

Elsewhere, the Golden Knights make a jump behind the play of Marc-Andre Fleury, while the Maple Leafs start to take control of the North Division.

We take a look at all of that and more in this week’s rankings.

Where does your team sit?

To this week’s NHL Power Rankings!

1. Tampa Bay Lightning. The defending champions have the league’s best record (by points percentage) going into Monday even though they have not had Nikita Kucherov all season. No weakness here.

2. Boston Bruins. Right there with Tampa even though the the Bruins have spent most of the season on the road and played half of their games without David Pastrnak. The defense has been a pleasant surprise.

4. Toronto Maple Leafs. They look like the best team in the North. If they do not make an extended playoff run this season you really have to start to wonder if it will ever happen for this group.

5. Carolina Hurricanes. They are 9-3-0 — which is great! — even though it seems like some of their best players have not yet started to play their best. They are getting next to nothing offensively from Teuvo Teravainen and Jaccob Slavin. That will not continue.

6. Colorado Avalanche. Injuries and going nearly two weeks without playing a game are the biggest thing holding them back right now. But they will be there when it counts.

7. Florida Panthers. You have to be happy with where they are right now, but that 5-1 record for Sergei Bobrovsky to go with his .884 save percentage make it seem like they are dancing through some rain drops here.

8. Philadelphia Flyers. We haven’t seen them for a while, but maybe that has helped them? While some other top teams have slumped, the Flyers record remains strong and they were winning a lot before their season had to be delayed a bit.

9. St. Louis Blues. They have to be tired of seeing the Coyotes. Monday’s game will be their seventh in a row against them. The Blues have been solid overall, but there is another level here for them to reach.

10. Montreal Canadiens. They have hit a little bit of a wall recently after their fast start. Josh Anderson and Tyler Toffoli are still making huge impacts and making Marc Bergevin look like the big winner of the offseason.

11. Edmonton Oilers. Do not look now but they enter this week having won six out of seven games. They are beating who they should beat. Connor McDavid and Leon Draisaitl will still need some help offensively for all of this winning to continue.

12. New York Islanders. Mathew Barzal is starting to get on a roll and is carrying an eight-game point streak into the week. He looks unstoppable right now.

13. Winnipeg Jets. Pierre-Luc Dubois never missed a game for Columbus, shows up in Winnipeg, plays two games, and then gets sidelined due to an injury.

14. Pittsburgh Penguins. They went 12 games without having a two-goal lead until they finally managed to build one on Sunday. That is staggering. They have still barely held a lead of any kind all season.

[Related: Ron Hextall could bring shift in how Penguins are built]

15. Washington Capitals. Goal prevention is a big problem this season, and even though they have played just one game in seven days they are still on a four-game losing streak.

16. Columbus Blue Jackets. Patrik Laine has been non-stop excitement since arriving in Columbus. A bunch of goals, a benching, and his first ever NHL fight.

17. Dallas Stars. Since starting the season with a four-game winning streak the Stars are 1-3-4 in the eight games that have followed.

19. Calgary Flames. Still trying to find consistency as a team, but on the plus side Jacob Markstrom has been great this season.

20. Arizona Coyotes. Conor Garland has turned out to be an amazing find for them.

21. Minnesota Wild. It has been two weeks since we have seen them play. What can you say about them at this point?

22. New Jersey Devils. Same story as the Wild. Nothing new to say about them right now.

23. Buffalo Sabres. They finally return to game after this week for the first time since the end of January.

24. Anaheim Ducks. John Gibson has a .924 save percentage in 12 starts and only has five wins to show for it. That is the sign of a bad team with a great goalie.

25. New York Rangers. The lack of offense has been the biggest disappointment this season. That was supposed to be a strength.

26. Los Angeles Kings. Jonathan Quick looks like he could be in for another tough season.

27. San Jose Sharks. An aging team with shaky goaltending and a lot a of bad contracts. Not a great combination for the long-term outlook.

28. Vancouver Canucks. Coach Travis Green and GM Jim Benning get the public vote of confidence from the owner. Now we see how much that is worth.

29. Nashville Predators. They struggled in back-to-back games against Detroit. Those are the games you have to win to gain ground. The fact Nashville only split them (and did not look great in the process of that split) is a concern.

30. Detroit Red Wings. They play hard. They are just lacking the talent throughout the lineup.

31. Ottawa Senators. They really need to figure out a way to get Matt Murray back to the level of play he showed early in his career. A lot of their rebuild will depend on that.

Adam Gretz is a writer for Pro Hockey Talk on NBC Sports. Drop him a line at phtblog@nbcsports.com or follow him on Twitter @AGretz.

Alexi Lalas: Christian Pulisic is like a young Luke Skywalker