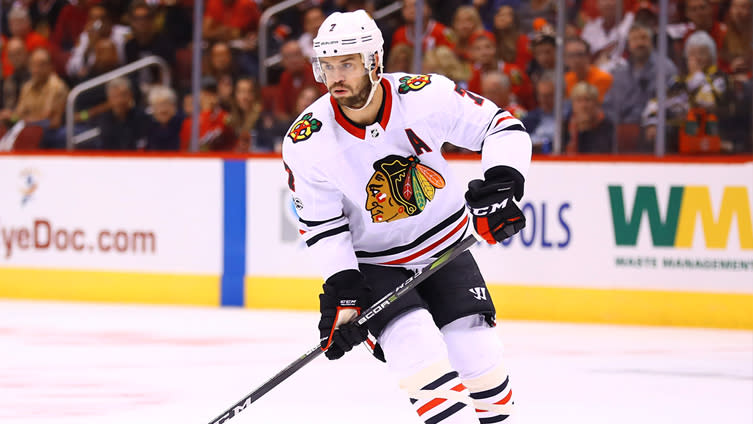 Seeing Brent Seabrook skate with his teammates at the Blackhawks‘ start of Phase 3’s training camp on Monday was an old familiar sight during a new unfamiliar time.

The three-time Stanley Cup champion with a hard shot and a harder check last joined the Hawks at a morning skate on December 18 ahead of a game at the United Center against the Colorado Avalanche. He was a healthy scratch for the contest then stayed in Chicago to undergo medical evaluation when the team traveled to Winnipeg the next day.

The 35-year-old blueliner then underwent a right-shoulder surgery later in December and separate hip surgeries in January and February.

“Knowing what he’s done and how much he’s laid on the line for this team over the last decade or more, it’s crazy to see how much he’s been through and how much he’s given to this team,” Blackhawks captain Jonathan Toews said after Monday’s practice. “So it’s nice to see him get that opportunity to take care of himself and focus on himself for once because that guy always seems to put the team before himself no matter what.”

“He’s been through a lot,” Blackhawks head coach Jeremy Colliton said. “He played hurt and that’s never easy. He’s proven he’s going to pay the price for the team to win and he’s gone through those surgeries and it’s been a difficult rehab for him, so happy to see him on the ice first and foremost.

“It’s not going to be easy, but the act that he’s here and he can provide his experience and his presence in the group to the group, it’s a huge benefit for us. And then we’ll see. We have some time here for him to get skating again.”

“I know the surgeries that he had are not easy surgeries to overcome. That’s a testament to his drive and dedication – his commitment,” Keith said. “I thought he looked good out there today. It’s been a long time since he’s played a game and to be back out here going full steam with the guys, he looked good.

“But I think as a friend and teammate you want to make sure he’s smart. I know Brent is fully aware of his body and what he wants to do. Just let him do his thing and push it at his pace until he feels 100 percent. … To be joining the group in the middle of summer without a proper lead up to the training camp, that just shows the kind of character he has and the commitment. We all take note of that and it inspires all of us.”

Toews noticed Seabrook was far from calling it quits early on after his procedures.

“Right away after his surgeries, I was really impressed at how quick he bounced back,” Toews said. “He just seems to be so physically resilient. And maybe that’s just something special about him that he can have three surgeries back to back to back like that and just kind of keep on trucking.

“Been training with him before he went home to Canada for a little bit and just seeing him in the gym and seeing him on the ice, obviously the conditioning, that pop and that strength is really going to come back in his stride, but he just seems really healthy.”

The Blackhawks finish their Phase 3 training camp on July 26 then head to Edmonton to take on the Oilers in a best-of-five play-in series in the NHL’s 24-team playoffs under the Return To Play program.

How to watch Washington Capitals vs. Carolina Hurricanes

NHL postpones Islanders games through at least Nov. 30 due to COVID Protocol

‘If the Braves execute, there’s no way they lose’ – Ben Verlander on the Braves’ dominant bullpen | Flippin’ Bats

Preview: Panthers looking to build on big win when they host Stars on Friday night

The case for diversity in broadcast booths