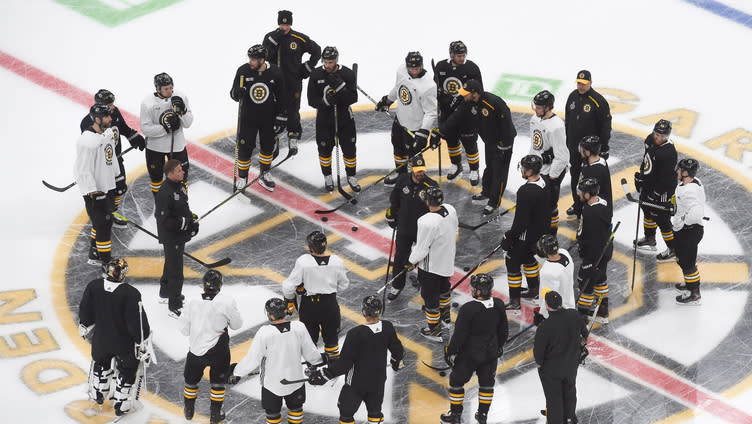 With Bruins players in Boston in greater numbers for the Phase 3 open of NHL training camp in mid-July, things are beginning to take shape.

Goaltenders Tuukka Rask and Jaroslav Halak were both at a voluntary practice at Warrior Ice Arena on Monday morning along with Zdeno Chara, Patrice Bergeron, Brad Marchand, Matt Grzelcyk, Sean Kuraly, John Moore and Par Lindholm as NHL teams can now have up to 12 players on the ice all at once.

Bruce Cassidy broke down where the Bruins are with the July 10 start date less than two weeks away and the B’s expecting roughly 35 players to attend a two-week training camp before heading to a hub city expected to be named by the NHL later this week.

“It looks like it will be 30 skaters. I don’t know if that’s been confirmed yet. We’ve got a list of 28 and of 30 [skaters] and four goaltenders. I think you’re unlimited with your goaltenders. The message will be, we’ll get together with [Patrice Bergeron] and [Zdeno Chara] first and see how these skating pods have gone,” said Cassidy, during a Monday morning Zoom call with Bruins reporters. “It’s just to make sure everybody is in a good place. It’s to just get a temperature of the guys and where they are at. Are they comfortable with the situation? Are they nervous? Are they excited to get going and that the group has done their work?

“The message for us hasn’t changed in terms of our goals haven’t changed with the unfinished business that our goal is to be Stanley Cup champions. Inside of that message is the unknown and how we need to be prepared to deal with that as it comes at us. It can be difficult because we don’t know how it’s going to work out with players’ families yet. How much time will they be away? Will they able to visit their families? Will their families be able to see them? That will be the most important thing outside of the obvious that is playing the games.”

Cassidy reeled off Tuukka Rask, Jaroslav Halak, Max Lagace and Daniel Vladar as the four Bruins goalies set for training camp, and Kyle Keyser may also have an opportunity to take part after healing from an injury during the season. The NHL may cut down to 28 roster players plus the unlimited number of goalies when the teams travel to the hub city locale, so there may actually be a couple of cuts at the end of the two-week training camp.

Still, Cassidy wondered if the extra bodies might come in handy depending on COVID-19 positive tests within teams such as the five positive tests that shut down the Tampa Bay Lightning informal skate last week. Something like that once the NHL begins playing games could really begin to compromise a team when combined with the normal spate of injuries and illness associated with playoff hockey.

“What happens when a player tests positive, is asymptomatic and then gets cleared after a couple of negative tests? Whatever they determine it needs to be, should you have those [extra] players on site in case the [positive] players have to miss two weeks?” said Cassidy. “That’s something I don’t know the final rules on. You’re going to need enough bodies. So that’s something the general managers are definitely discussing with the league, and I assume the [NHLPA]. I know they want to limit the number [of players] you do have for obvious reasons to limit interaction.”

A Return to Play agreement between the NHL and the NHLPA is expected in the coming days along with naming the hub cities, and perhaps an extension of the current CBA for a few more years as well. At that point, the Bruins will know exactly the parameters of what they are dealing with for training camp and the games to be played largely in August, September and perhaps October.

The expectation is that young players like Jack Studnicka, Jakub Zboril, Urho Vaakanainen, Paul Carey, Trent Frederic, Steve Kampfer and Karson Kuhlman will be among the names included on the Bruins roster, but it will be interesting to see what other players are going to be included given the unknown that the Black and Gold will be skating into over the next few weeks.

Next NFL Rumors: This Is The Only Other Team That Spoke With Cam Newton

Tom Wilson, Lars Eller among Capitals to play in preseason opener vs. Bruins

John Tavares with a Goal vs. Montreal Canadiens

It’s his turn to get into the NL MVP conversation

Burnes goes beyond seven to help Brewers past Pirates, 7-2

Bruce Cassidy Explains Why This Bruins Prospect Impresses Him So Much