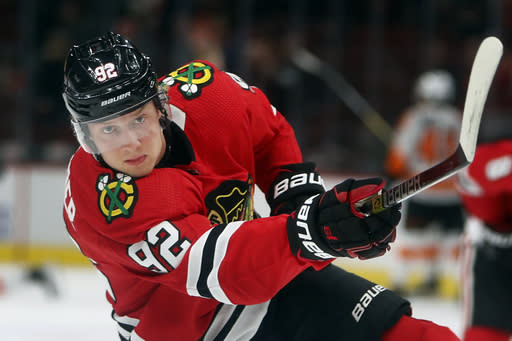 The 22-year-old Nylander got hurt during the playoffs. Team physician Michael Terry said Wednesday that Nylander rested and then trained conservatively, but symptoms returned when he started to skate again.

Nylander had surgery Monday to repair a meniscus tear in the knee but is not expected to return to hockey-related activities for four to six months.

The Blackhawks were hoping the inconsistent Nylander might be able to take a step forward this year. But the abbreviated 56-game schedule ends in May, giving Nylander a small window for a possible return.

Nylander was drafted by Buffalo with the No. 8 pick in the 2016 draft. He was traded to Chicago in July 2019 for Henri Jokiharju, another former first-round pick who has become a promising young defenseman for the Sabres.

Nylander had 10 goals and 16 assists in 65 games in his first season with Chicago. He has 13 goals and 19 assists in 84 career NHL games.

a Goal from Calgary Flames vs. Edmonton Oilers