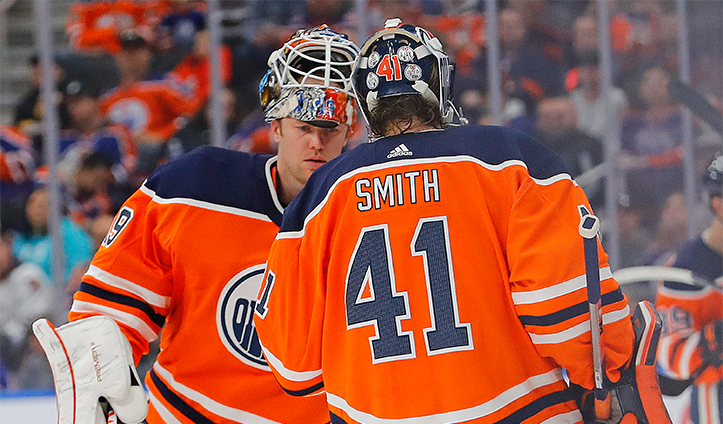 Edmonton Oilers head coach Dave Tippett pretty much evenly rotated Mike Smith and Mikko Koskinen in net during the regular season and it sounds like both goalies could see time between the pipes against the Blackhawks in the qualifying round as well.

Smith certainly has the edge when it comes to postseason experience. He’s played in 24 Stanley Cup Playoff games, starting 22. Last season, he started all five for the Calgary Flames before they were knocked out in the Western Conference First Round by the Colorado Avalanche. Smith is 11-12 with a 2.17 goals-against average and a .938 save percentage in the playoffs. Koskinen hasn’t played in an NHL playoff contest yet.

Against the Hawks in the regular season this year, Smith posted a goals-against average of 3.00 and a .906 save percentage in three starts. Koskinen saved all 10 shots he faced in relief of Smith in a 4-3 Blackhawks victory at the United Center on March 5, the only time he faced Chicago this season.

Both goalies are battling at training camp to see who will make the majority of the starts in the best-of-five play-in series against the Blackhawks, starting Aug. 1 at Edmonton, but both are likely to go at some point against Chicago according to Tippett.

“I envision both guys getting an opportunity to play.”

Of the 37 #Oilers wins during the regular season, 19 were credited to Mike Smith & 18 came from Mikko Koskinen, so it should come as no surprise Coach Tippett is confident in both netminders heading into the playoffs. pic.twitter.com/fXoCaJgeSJ

“We have a great deal of confidence in both guys,” Tippett said on a video conference call Saturday. “As camp goes on here, we’ll continue to kind of monitor where they’re each at. Both look really good so far. I envision both guys getting an opportunity to play.”

Next 2016 World Cup of Hockey provides lessons for NHL restart

Re-signing Tatar, Danault will be challenge worth exploring for Canadiens

The Latest: No. 3 Ohio State cancels game at Illinois

PHT Morning Skate: No movement with Cirelli; Penalty-killing vs. Gretzky

Preview: Ryne Stanek opens things up for Rays in Game 2 in Baltimore